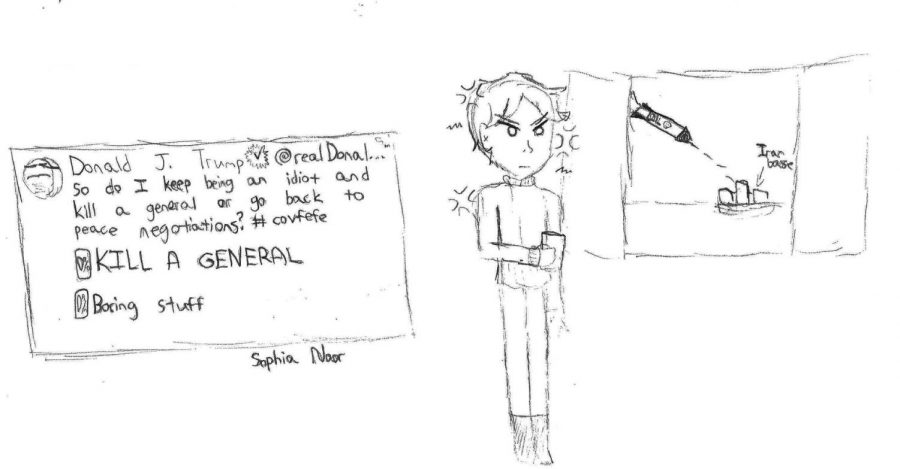 In a recent drone strike in Iran, the United States government killed Iranian General Qasem Soleimani. Putting aside the legality of killing the leader of a sovereign nation, many have feared that this attack will escalate into a full US invasion of Iran, and by extension, World War 3. This might seem like a stretch, but there is a real argument for the occupation of Iran, so we must ask the question: are we all going to die?

Unfortunately, there is significant precedent for the US invading a foreign country in the Middle East for no apparent reason. Both the US wars in Iraq and Afghanistan were at best controversial, and at worst a deliberate attempt orchestrated by the American government to topple the regime of two already unstable countries for their own interests. And a lot of people are all too familiar with the narrative the Trump administration has been spinning for the past few weeks.

For one, the 2020 election is rearing its head, and although the Democrats haven’t picked a nominee yet, Trump’s approval rating has been steadily below 50% for almost his entire presidency, and practically every single Democratic candidate polls better than Trump in a one-on-one race. Quite famously, the Iraq war was started by George W. Bush at a very convenient time (right before his election), and as a result, his approval rating shot up to 70%; the war arguably won him a second term.

For another, the Trump administration has used a very similar line of attack to try to convince the American people to support the war: they lied. Their current stance is that Soleimani was an enemy of America after having killed Americans in the past, and was apparently planning an “imminent attack” on the United States. The thing is, the history of America in Iran is rife with CIA backed coups to protect the interests of oil companies (1953), and when pressed on the “imminent attack”, Secretary of State Mike Pompeo said that the administration didn’t know “precisely where or when” it was going to happen.

This is uncomfortably similar to the vague “weapons of mass destruction” that the Bush administration used as an excuse to invade Iraq. There were no weapons of mass destruction, and members of Congress admitted that they knew so at the time, but they were still willing to lie to the public to get Bush a second term. And with Trump’s approval rating on the decline, in addition to a loyal party that has proved itself more than willing to lie on his behalf, a war with Iran might not be completely impossible.

This is combined with a general hawkishness coming from both political parties in the US. Both in the Afghanistan and Iraq wars, Democratic leadership was all too eager to back the Bush administration in their lies and propaganda. Just last year, Trump was able to allocate another $22 billion to the existing $600 billion dollar military budget (for comparison, this is more than China, Russia, and the entire EU combined spend on their militaries, and the UN estimates that $200 billion dollars would be enough to end both world poverty and world hunger) with the support of 188 (a majority of) House Democrats. Ostensibly, there is no anti-war party in the US right now that could provide a counterweight to Trump’s consistent and dangerous escalation towards direct conflict with Iran.

The issue is, a war with Iran would be far more dangerous than a war with Iraq. Iran is a more populous, influential, and militarily stronger country than Iraq. They have a far reaching influence on a number of different armed militias throughout the Arab world, in addition to an army funded with $43 billion and little regard for civil liberties (they are famous for executing members of the press, dissenters, and even children). This means that an invasion could have a potential death toll of millions.

More broadly, Iran is the source of a significant amount of China’s oil supply, and is one of the two major powers in the Middle East. As a result, a war with Iran could quickly escalate into a bloody conflict in the Middle East and beyond, which would have some very powerful people as direct stakeholders.

While an all out nuclear holocaust is unlikely, the escalation to a US invasion of Iran should worry anyone who isn’t a fan of millions of people dying in yet another pointless war.