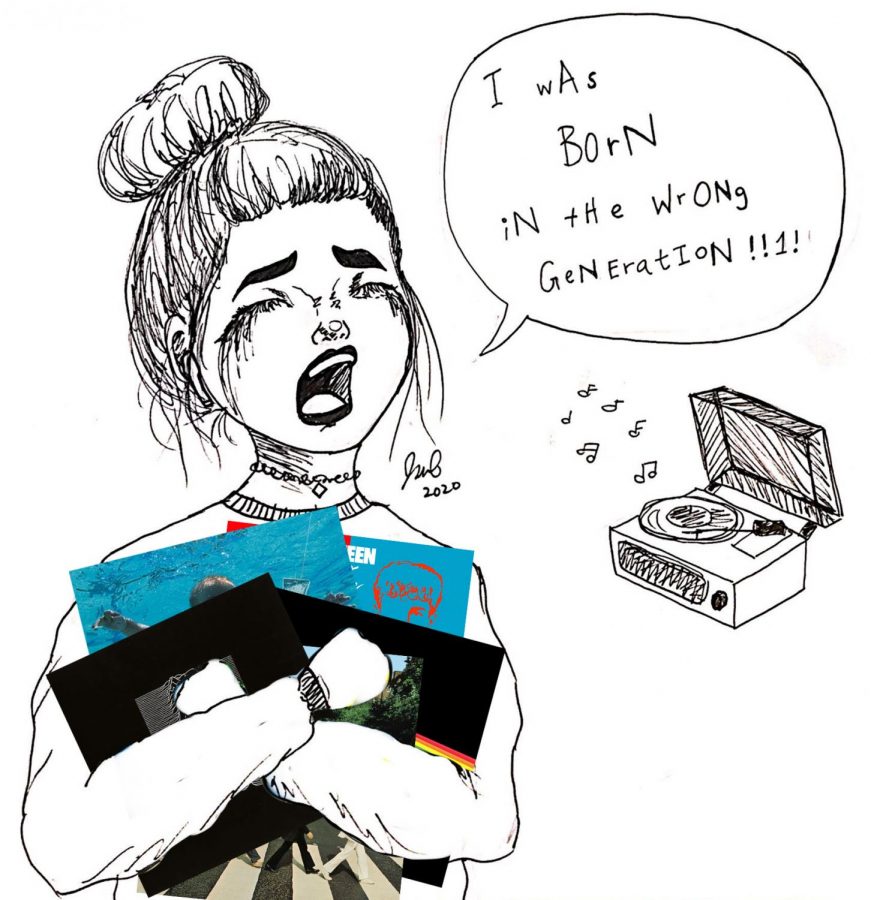 Each generation is envious of the one preceding it—ours is no exception to this. Set in 1976, a teenager in cult classic film “Dazed and Confused” remarked that “the 50s were boring, the 60s rocked, and the 70s… oh god, well they obviously suck.” Our yearning for the 90s and 80s—as reflected in recent fashion and the youth’s social media posts’ adamancy that they were “born in the wrong generation”—are not exclusive to us. However, with a little exploration, we can gain an appreciation for our own era and fully embrace it; we can uncover the gems in our culture and value them just as much as we value the art and culture of the past. As opposed to shunning all the art made today into a box of stereotypically autotuned and overproduced pop music about sex, drugs, and alchohol, we can appreciate depth that is out there, which can even rival the artists of the past.

A sense of comfort and possible fulfillment can be found when you realize that great art is being made at this very moment in time—and not just decades ago. With the start of the new year, there has been discourse about the 1920s circulating online. Specifically, about whether the 2020s will be as artistically prosperous as the 1920s—which has literary titles such as Ulysses, Mrs Dalloway, and The Wasteland to its repertoire This is part of the wider debate that there are fewer great authors—or artists in general—alive today, along with the annual claim that great music and literature is obsolete.

It is incredibly easy to dismiss today’s art entirely but that dismissal can seem overly pessimistic; as much as creative pursuits are solitary endeavours, it can be argued that seeing other artists—or any other individuals—prosper can be motivating. It’s the idea that prospering as an individual can inadvertently lead others to do so as well. And it’s at this point that great artists of our generation should be highlighted; if there are artistic geniuses in generations past, there surely exist artistic geniuses today. And many of the great artists of the past were not recognised as geniuses at the time—Kafka and Keats to name a few.

With social media, there lies a perfect opportunity to search for the great artists of our era—perhaps those who are overly focused on the art of the past are not looking for the art that is being created today. The most popular form of “I was born in the wrong generation” can be found in the humble Youtube comment. They typically write something along the lines of “I am 13 years old, but I prefer The Doors to Taylor Swift, I was born in the wrong generation!”, and although there can be some humour hidden in those types of comments, they do reveal a romanticisation of the past and a disdain towards the present. This is not nearly as harmful as it is disappointing; there are many great artists making music during our time—but they are often limited by this somewhat reductionary approach to “our generation’s music”. This is where exploration can come into play, for I have heard The Doors and think they would like artists such as John Maus and Arthur Russell—and let’s not forget that older artists such as Nick Cave & The Bad Seeds released their (arguably) best album all the way back in 2016.

Perhaps there exists an unspoken expectation that the pinnacles of art will be handed to us on a plate, but with social media, we are as free as ever to partake in our own exploration of art being made today. And not only can we discover such art, but we can promote and share it with ease. Artists that would be usually silenced can be propelled into the spotlight with the help from social media; something we should take full advantage of. Even the sharing of art has taken entirely new forms in this century—with Radiohead’s “pay what you want” when they released In Rainbows, or with Kanye’s release of The Life of Pablo at Madison Square Garden. One can predict these are the types of artists that the following generations will praise as we do Bowie or Kate Bush.

I take “I was born in the wrong generation” comments as a slap in the face to all the great innovators of the 21st century, and I urge everyone to peer beyond what is given to you and sink deeper into the work of our own creatives. I don’t think geniuses should be handed to us; I think they deserve to be discovered if only to avoid endless posthumous publishing of authors or musical artists that deserved recognition at the time of creation. And I challenge both myself and you, the reader, to be more curious about our generation; to fully embrace it for what it is rather than look to the past as the sole source of inspiration.