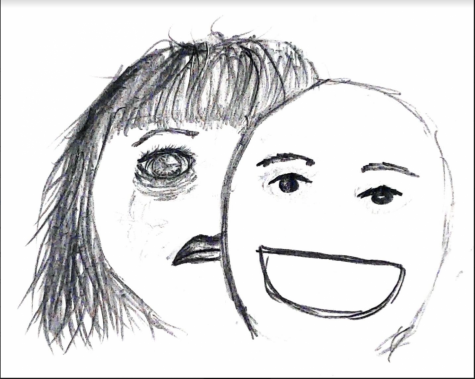 e are usually pretty good at putting on masks; we do it all the time. We’ll force a smile and say, “I’m fine”, but what happens when you’re really struggling and you cannot find it within yourself to smile one more time? The mask is something we rely on to cover up our pain, but what happens when that safety net is gone, how can you tell someone you’re hurting? How can you tell someone that you can’t remember the last time you really felt okay? Stigma happens when some person is viewed as an “other.” A person who is considered an “other” is denied full social acceptance. In reality, the stigmatisation of mental illnesses in the media can harm so many people who are suffering,

Not all depictions of mental illnesses on social media are accurate. In fact, several TV shows and films have an alarmingly poor grasp on what it means to have a mental illness. This further perpetuates harmful stereotypes that feed the stigmas that are attached to mental health issues. In movies and TV shows the images of dramatic panic attacks are those usually associated with being “mentally ill”. However, is this really true?

The power and influence of the media ensures that what we see and hear will impact our behaviour and experiences whether we are conscious of it or not. Speaking as a teenager, the media is one thing that is inseparable from our lives. As teenagers, we are extremely susceptible to its influence when it comes to our behaviour because the media indicates the “norm”. Since a large part of these messages are ingrained in stories and movies, it dictates our attitudes towards issues such as mental health.

The media has the power to act as a portal into certain characters’ lives that in reality, we as consumers may not get the time to know. Certain studies also indicate that the mass media is one of the public’s primary sources of information about certain disorders such as bipolar disorder , schizophrenia and depression. It is very easy to believe myths about people with mental illnesses and how they interact with others based on the made up characters presented in the media.

Many think people who are struggling with mental health issues are lazy or just making it up.  There is also the perception that people who struggle with mental illnesses are either crazy, “possessed by demons”, violent, out of control and unsafe. Consequently, media consumers tend to blame an individual for the illness that they have. The portrayal of mental illnesses is disturbing, untrue and is damaging for several reasons.

Whether we realize it or not, the amount of mass media we engage with on a daily basis harms our perception of mental health and we stigmatise and attach stereotypes to such things when they are not true. So what can you do to stop the stigma? Alter the way in which you speak:  stop using words like “crazy” and “deranged” in a derogatory manner.

Also, mental health awareness should not be just for a day or for a month. We need to be informed about it constantly because it can easily happen to someone who is close to us. Community awareness for mental health reduces stigma. It equally increases the chances for early intervention, resulting in a faster recovery.

Awareness is a form of education. The more you know, the more power you have. This power can be used to affect positive change  in our community. We, as a society, have created a culture where the media tends to attack the individual with mental illnesses rather than framing mental illnesses as a societal issue. This is not just “their” problem, it is our problem as a society .

The portrayal of mental illnesses in the media is not what we as a society can base our perceptions on. Speaking to people and asking how they’re feeling or doing (and genuinely meaning it) is one simple thing that we as an ISL community can do to build a safer environment. So I’ll begin, I’m extending the kindness further and I’d like to ask anyone who’s struggling right now;